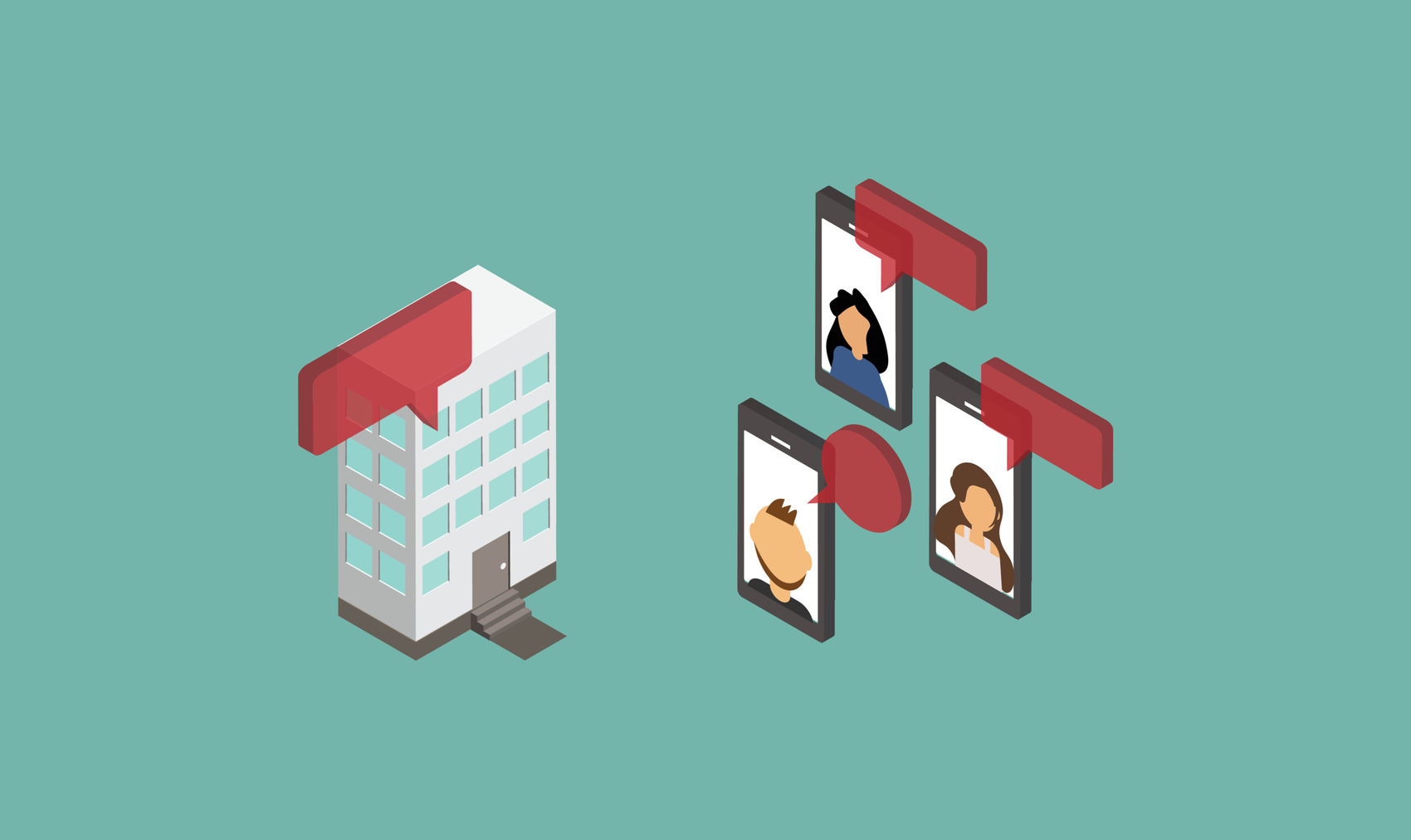 Driven by the demand for more flexible working opportunities, the gig economy has evolved at a rapid pace in recent years. The latest gig economy statistics show the need for these new working styles is greater than ever since the pandemic, and the rise of trends like the great resignation.

More than ever, people are turning to freelancing, remote and flexible work as a way to manage more effective schedules, based around work/life balance. Thanks to the cloud, and ever-evolving platforms for gig workers, there are new opportunities emerging all the time.

Today, we’re going to be looking at the evolving nature of the gig economy in 2022, and why it’s such an important part of the future of work.

The Statista research department demonstrates a consistent momentum of growth for the gig economy in the years to come. Between 2018 and 2022, the gig economy has grown from a value of 204 billion to $401.4 billion, almost doubling within 4 years. By 2023, Statista predicts the potential for short-term and contract work will drive the gig economy to a value of $455.2 billion.

While there are various factors accelerating the growth of the gig economy at this stage, many experts suggest the pandemic has been particularly valuable to the ecosystem. 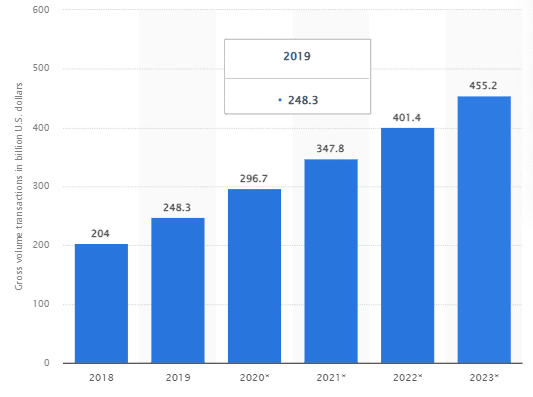 2. 24% more people entered the gig economy during the pandemic

With many traditional solutions for employment becoming non-existent during the pandemic, a multitude of Americans decided to choose freelancing and the gig economy instead of a full-time job. Upwork, one of the leaders in the freelancer job marketplace, found 24% more people entered the gig economy in 2020, compared to post-pandemic years.

According to the report, the number of full-time freelancers also grew by 2 million in 2020. With 59 million Americans who reported relying on freelancing for full-time work made up around 36% of the overall US workforce.

About 34% of the survey respondents who freelance said they had started during the pandemic, and only 10% said they had begun freelancing in the 6 months prior.

3. 38% of employees are now using gig apps to find work

According to a Wonolo study for 2022, around 38% of people are using gig apps like Lyft and Doordash to find work, while 31% accepted work using app-based staffing platforms. Compartively, around 56% of people went to a job location and inquired about work to find a role.

The survey also found around 74% of respondents are in the process of leaving a current job and looking for new opportunities to increase their wages. Another 72% are looking for supplemental income which might be offered by a gig economy platform.

4. The gig economy in England and Wales has trebled in 5 years

Research carried about by Britain Thinks (a consultancy firm) and the University of Hertfordshire found around 3 in 20 adults found work through online gig economy platforms at least once per week in 2021, an increase from one in 20 in 2016.

According to the study, the growth has been driven by the rapid expansion of delivery and driving work for platforms like Deliveroo and Uber, with around 9% of the workforce conducting this kind of work in 2021.

The report also found the platform is male-dominated, and points to a significant shift in the labor market, which has been accelerated by the pandemic.

5. 32% of gig economy freelancers saw an increase in demand for their services during the pandemic

A 2022 report into the state of the freelance and gig economy over the last couple of years by Payoneer revealed a number of experts seeing increased demand during the pandemic. Though around 45% of respondents said there was no change to their levels of demand, 32% said they had accessed more work opportunities during COVID-19.

Around 23% of respondents said available work decreased during the pandemic.

At the same time, 40% of respondents also said they were earning higher rates of income for their work during the pandemic, while 27% said rates stayed the same. Only 12% of respondents said their rates had dropped to lower levels than prior to the pandemic. 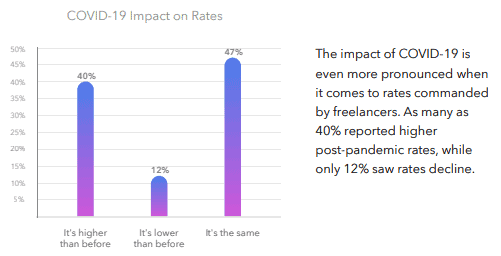 6. US freelancers contributed around $1.2 trillion to the American economy in 2020

Despite the strain of the pandemic, freelancers and gig economy workers are contributing significant value to the economy. According to MBO partners, US freelancers contributed $1.21 trillion to the economy in America in 2020. This number equates to around 5.7% of the US GDP.

MBO Partners suggests the rising value of the gig economy is partly thanks to advances in connectivity and technology, which have allowed more gig economy workers to joint he landscape.

7. 16% of Americans have earned money from the gig economy

According to the Pew Research center, 16% of Americans have earned money via an online gig platform by driving for taxi or ride hailing company, delivering groceries, or performing household tasks. Some professionals have also made delivers from stores for a delivery app or picked up dry cleaning for customers.

Adults under the age of 30 were most likely to do these jobs, as well as Hispanic adults and individuals with lower incomes. Three in ten 18 to 29 year olds have earned money from a gig economy platform, but the number drops to only 18% for people aged between 30 and 49. 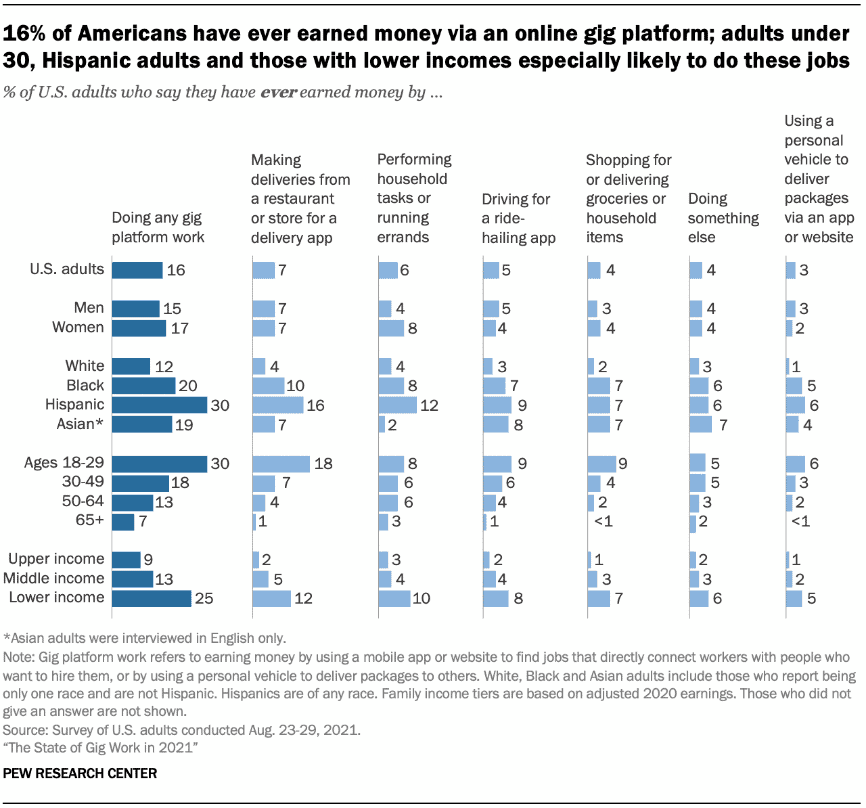 8. The number of women applying for gig economy jobs tripled in 2021

According to Taskmo (formerly FeedmyPockets), the gig economy has seen a 3 times increase in participation from women during 2021. The demand for flexible working has increased drastically in recent years, as women look for additional work-life balance.

Taskmo’s research also discovered an increase in job allocations for industries like fashion technology, health technology, ecommerce, educational technology and fin-tech among women gig workers. Around 50% of the women who registered for Taskmo were from urban areas, while 30% belonged to “tier 3” cities.

9. North Americans earn the most in the gig economy

According to the Payoneer 2022 report on freelancers and the gig economy, the average hourly rate in North America is much higher than in elsewhere around the world. The North American freelancer earns an average of $44 per hour, compared to only $22 per hour for Central America, Asia, Central and Eastern Europe, and Africa.

10. Women represent around 46% of the independent contracting workforce

In 2021, a number of women joined the freelance and gig economy world, prioritizing flexibility over stability. According to the American Action Forum, omen now make up around 46% of the independent contracting space, compared to around 33% in 2017.

The reports from the American Action forum build on additional studies from elsewhere in the gig economy. For instance, women comprise around half of the employees on Uber Eats, and the Door Dash delivery workforce is made up of around 58% women.

11. Demand for freelance work has increased by 15% among younger workers

Research by Payoneer into the freelance market and gig economy found around 15% of 18-24 year olds have demanded more freelance opportunities in the last year. In fact, demand for gig economy work increased for all people aged between 18 and 44. 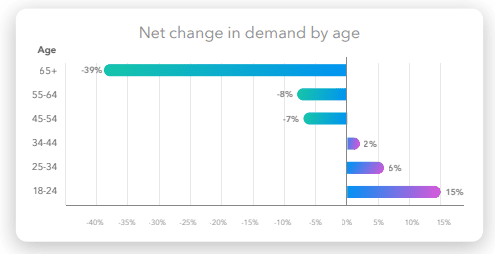 12. Saving extra money is the main reason to use the gig economy for 56% of employees

The Pew Research Center study into the state of gig work in 2021 found around 56% of people employed I this environment rely on the landscape to help them save up extra money for various purposes. Around 52% of respondents said they use the landscape to cover gaps in their wages and changes in income.

While additional finances are the main reason to join the gig economy for most, 49% said they liked being able to control their own schedule, and 35% appreciated being their own boss. 28% also said they used the gig economy because there weren’t many job opportunities in their area. 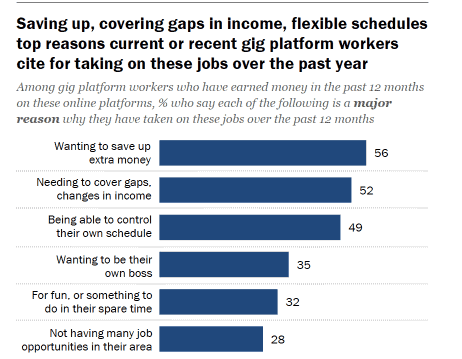 An Upwork study into the state of the gig economy and freelancing in 2021 found 53% of all freelancers provided skilled services like marketing, computer programming, business consulting and IT in 2021, an increase from 50% in 2020.

The report also found 51% of workers with post graduated degrees are freelancers – an increase of 6% since 2020. According to the study, freelancing is growing among the most educated, and becoming less common among the least educated. The share of high school graduates or people with a lower level of education declined from 37% to 31% between 2020 and 2021.

14. Web and graphic design jobs are the most popular

The report from Payoneer into the state of the gig economy in 2022 found the most popular fields of work in the freelance and gig economy are web and graphic design (22%), followed by “Other” fields (like working for ride-sharing apps), and programming.

Content writing and multimedia production were also some of the most popular choices. However, the most popular landscapes for freelancing weren’t necessarily the ones paying the highest income. Finance offered the best hourly wage at $41 per hour. 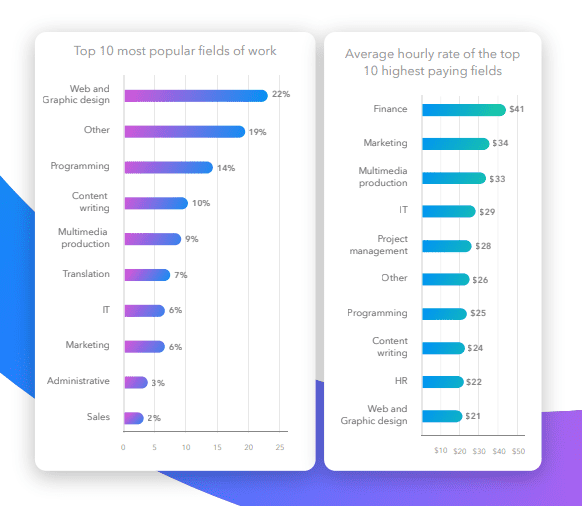 15. 3 in 10 people say gig economy jobs are their main source of income

According to the Pew Research report on the state of gig work in 2021, around 3 in 10 people say the ecosystem has given them their primary source of income throughout 2021. Additionally, 68% of respondents said they’re using the gig economy as a side job.

The Pew Research study notes the majority of gig platform workers now rely on this income to meet basic needs. Around 29% of respondents say they spend 10 to 30 hours a week on their gig economy roles, while 41% of respondents do this work for less than 10 hours per week. 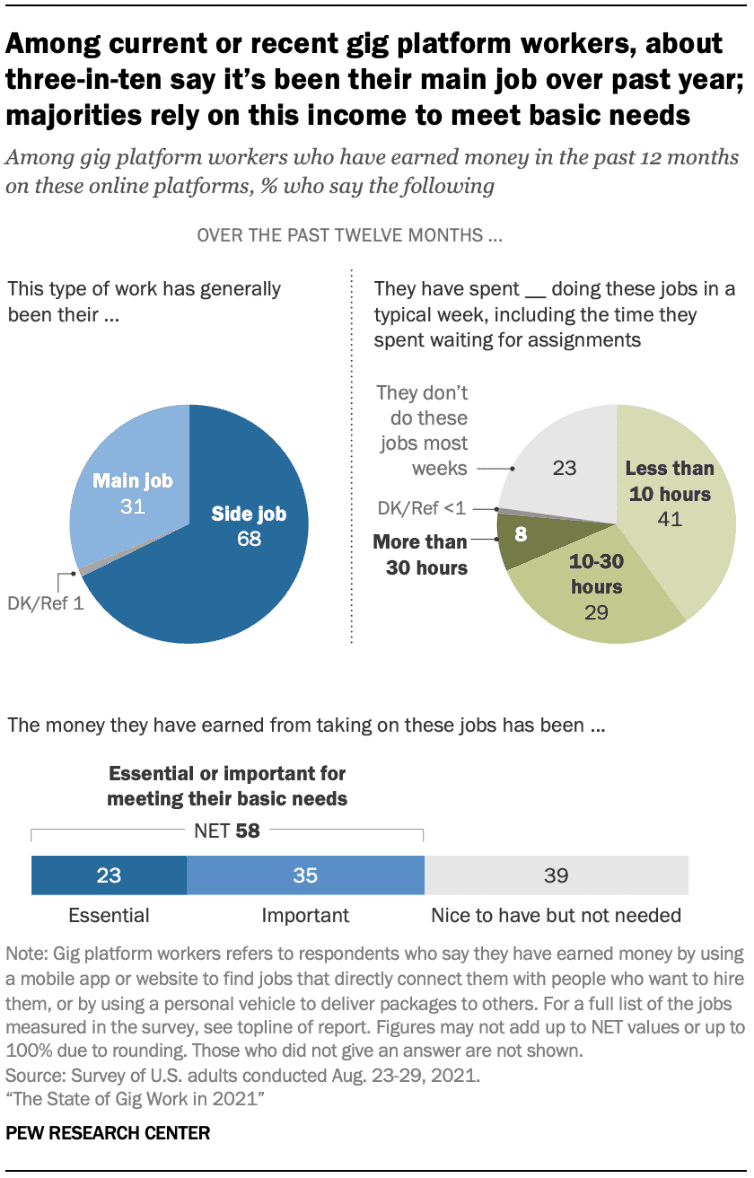 16. Income for women in the freelance economy is increasing

Unfortunately, the gender pay gap in the traditional workplace is still an issue in the freelance and gig economy, according to Payoneer. Women now make an average of around $23 per hour compared to $28 per hour for men. However, the gap is narrowing slightly over the years.

Notably, Payoneer also found the age gap differs according to region. Where the female hourly rate is higher than men’s such as in South America, this is usually influenced by women’s skills in higher-paid industries within those regions.

Despite the pay gap, Payoneer found women report higher levels of satisfaction from the freelance and gig economy than men. 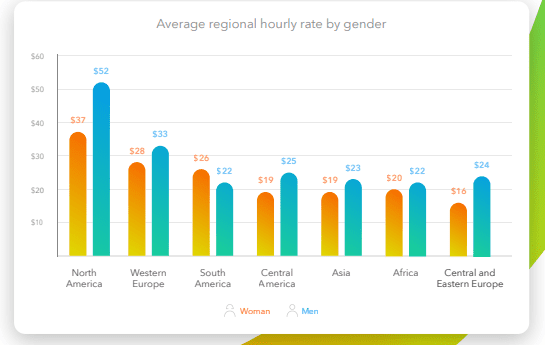 17. 2 out of 3 gig workers feel more secure in freelance jobs than they once were

The uncertain nature of the workplace caused by the pandemic has led to a greater level of confidence in gig economy opportunities. According to MBO partners, 2 out of 3 full-time independent workers now feel they’re more financially secure than traditional employees.

The evidence seems clear: gig economy opportunities are growing in 2022. Now more than ever, we’re discovering just how valuable a flexible workplace can be. The gig economy statistics above highlight this landscape as the potential future of work.

As employees continue to seek out more flexible modes of work, there’s no doubt the demand for gig economy opportunities will only continue to grow.

© 2022 Remotely. All rights reserved. Built with ❤️ from Europe, used by people everywhere.